Buy quality used Volkswagen Jetta auto parts instantly with next day delivery. Choose the year of your Jetta below.

Volkswagen Group, also known as Volkswagen AG, is a major German automobile manufacturer that was founded by the German government in 1937 to mass-produce a low-priced “people’s car.” The company's headquarters are located in Wolfsburg, Germany.

The Volkswagen Jetta was first introduced in 1979 at the Frankfurt Auto Show as an alternative option for people who did not find the Volkswagen Golf’s hatchback body very appealing. It was built in the Wolfsburg plant in Germany and it was offered as either a 2-door or a 4-door sedan. It quickly became the most popular vehicle in the brand's lineup becoming the most popular European car in the U.S., Canada and Mexico. This popularity helped establish the German brand in America where it was struggling to gain a foothold. While it has continued to be a popular option for European car buyers, its European styling has not been as popular in the U.S. With that said, it has always been the sales star in North America, even beating out the Golf. The origins of the Jetta grew out of a need to offer a small sedan when that segment started to grow in the U.S. at the end of the 1970s. At that time Volkswagen realized that they did not have anything to offer entry-level buyers except for the hatchback Golf. Since they needed a quick solution, Volkswagen borrowed the Golf's platform, slapped on a trunk and offered the new Jetta as a coupe or 4-door sedan. The Jetta was an instant hit when it was first introduced and it was able to solve two problems for Volkswagen. First, it provided a European alternative to the Japanese cars flooding the market and second, it tapped into the tuning subculture that was searching for a 4-door solution. Believe it or not the Jetta would eventually outsell the Golf as Volkswagen's most popular model in the U.S.

The second generation of the Jetta was introduced in 1984 with a number of gasoline and diesel engine options. Volkswagen even offered a high-performance version called the GLI which they borrowed from the Golf playbook resulting in instant success. With the American demand for the Jetta cemented in place, Volkswagen introduced the MK2 model in 1985. It was so popular it outsold every other European car until it was discontinued in 1992. The reason it remained a best seller was due to its low price, practicality and great fuel mileage. The down side of the popularity of the MK2 was that nothing else in the Volkswagen lineup was really that interesting so sales really dropped off in the early 1990s.

The third generation MK3 Jetta that was introduced in 1993 basically saved Volkswagen in America by outselling the Golf by nearly two to one. The amazing thing about the MK3 was that it added a level of performance rarely seen in a 4-cylinder turbo-diesel, by matching the acceleration of an equivalent gasoline powered engine.

The fourth generation MK4 Jetta was introduced in 1999 and for the first time it came standard with the 1.8T turbocharged four-cylinder engine which really appealed to the tuning crowd because it could push out way more horsepower than the factory spec. was lighter than the 6-cylinder and less expensive to modify. It came out shortly after its larger sibling, the Passat, which shared a lot of the Jetta’s styling cues. The MK4 had more of a rounded shape and arched roofline and a distinguishing feature was the whip antenna which became a trademark at the rear end of the roofline. There were also a few advanced features such as; sensor-controlled windshield wipers and automatic climate controls. The ride was softened to provide a softer ride however this was met with some criticism as it was still quite hard in comparison to competitors. Safety on this iteration of the Jetta was a high priority and in crash tests the Jetta received very high marks. In the New Car Assessment Program tests conducted by the National Highway Traffic Safety Administration, the car received five out of five stars for both driver and passenger protection in frontal impact. Critics generally found this iteration of the Jetta to be acceptable however other reviewers noted that the car was ugly and a somewhat expensive choice in the compact car segment.

The fifth generation of the MK5 Jetta was introduced at the Los Angeles Auto Show in 2005. It was built in the upgraded Puebla, Mexico facilities which included a new engine production line and 460 robots for the actual assembly. The styling of the MK5 reflected a new direction for Volkswagen with a new front grille and other styling changes which were generally applauded by critics. Handling was identified as a strong point, with quick and precise steering and minimal body roll. Fit and finish received excellent marks, with most reviewers noting that the car felt very upscale. Along with the hatchback version, the MK5 ranked among the top cars on the market in independent reviews and resale value.

The sixth generation of the Jetta was also known as the New Compact Sedan (NCS) during its development and was introduced in 2010. It was larger but less expensive to manufacture than previous generations which made it more competitive against rivals such as the Toyota Corolla, Honda Civic and Nissan Sentra. It no longer shared any body panels with the Golf and as a result of Volkswagen’s target of increasing sales in North America, the Jetta was removed from the premium compact car market and Volkswagen was forced to make quite a few cost-cutting measures just to stay competitive. In 2013 the Jetta Turbo Hybrid was introduced at the North American International Auto Show.

The seventh generation MK7 Jetta was introduced at the 2018 North American International Auto Show in Detroit, Michigan. This model is larger than its predecessors offering more interior room. It also offers a totally redesigned customizable interior lighting system, projector LED headlamps and tail lamps and a panoramic sunroof. Safety features on the Jetta include an Intelligent Crash Response System (ICRS), and a standard safety cage. An automatic post-collision braking system, a tire pressure monitoring system (TPMS), as well as seven safety and stability-enhancing systems that all come as standard equipment. 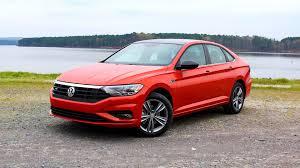 Fun fact:
The Volkswagen Jetta has had more than 10 different names in multiple markets over the nearly 40 years that it has been on the market. Some of these names include the Atlantic, the Fox, the Bora, the Vento, the Sagitar, the Clasico and the Voyage.

It is pretty clear why the Jetta became an instant hit. But how does it stack up against the competition? Let's analyze that further.

As you can see from the table, the Jetta is not the leader in every category but it leads the pack where it counts. If you measure your vehicles based on overall quality, attention to detail, workmanship, safety and dependability, then you cannot do better than the Volkswagen Jetta.