Buy quality used Toyota 4Runner auto parts instantly with next day delivery. Choose the year of your 4Runner below.

The Toyota 4Runner appeared on the scene in 1984 as a slightly modified Toyota (Hilux) pickup truck. This version of the SUV had 2 doors and 4WD with a solid front axle, removable fiberglass shell over the rear bed and an inline 4-cylinder engine with a whopping 2.4L displacement. Basically, it looked like a converted pickup truck, which it was, but Toyotas timing in introducing this version of the 4Runner was perfect as usual. Since many other manufacturers were introducing their own versions of a mid-size SUV, Toyota made the decision to differentiate the 4Runner by touting its ground clearance (which was better than its competitors) and removable top. 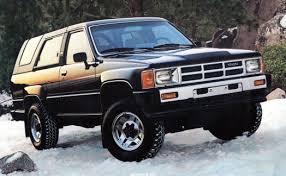 The 4Runner has gone through some major evolutionary stages since it was introduced but with every generation it has continually improved to stay competitive with other mid-size SUVs. In the early stages of evolution, the changes were minor but important like adding a fuel injection and independent front suspension.

The latest generation for 2018 still maintains the tough as nails body on frame construction. So, if your destination is a secluded trail, local boat ramp, traffic clogged school drop-off zone or just the standard city streets the 4Runner delivers with time proven comfort, versatility and reliability. The tough chassis is also the source of 4Runners comfortable ride because you don’t need to sacrifice one for the other, especially with the 4Runner. The 4Runner also includes, as standard equipment, features like; the star safety system with vehicle stability control, traction control, an anti-lock brake system with electronic brake-force distribution as well as brake assist and smart stop technology brake-override system. And as if this was not enough, there are eight standard airbags that include driver and front passenger with advanced thorax, abdomen and pelvis front seat-mounted side airbags. All-in-all this is one SUV that will protect driver and passengers without sacrificing the fun of everyday driving. It is truly a diehard rugged SUV with a safe and comfortable ride. 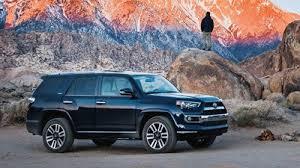 Fun fact:
It has been said that Toyotas run forever and that is not that far from the truth. If you think about it, how many older Toyotas do you see on the road in a day, probably quite a few. Statistics show that eighty percent of Toyotas sold 20 years ago are still on the road today. Not sure any other car company can back up a claim like that.

But enough about how great the 4Runner is. Let’s take a look at how it stacks up against its closest competitors:

As you can see from the table the 4Runner is not the leader in every category but it leads the pack where it counts. If you measure your vehicles based on overall quality, attention to detail, workmanship, safety and dependability, then you cannot do better than the Toyota 4Runner.