Buy quality used Nissan Leaf auto parts instantly with next day delivery. Choose the year of your Leaf below.

The Nissan Leaf is an all-electric compact hatchback that is manufactured by Nissan. It was introduced in the U.S. and Japan in 2010. The U.S. Environmental Protection Agency (EPA) estimated the range for the 2010/2011 Leaf at 99 MPGe with a 73 Mile Range.

Over the past 8 years, more than 300,000 Leafs have been sold worldwide making it the world’s all-time best-selling highway-capable all-electric car in history. Since the Leaf is all electric it produces no tailpipe emissions or dangerous gasses which has resulted in numerous awards and recognition including the 2010 Green Car Vision Award, the 2011 European Car of the Year and the 2011 World Car of the Year award.

The first generation of the Leaf was produced from 2010 to 2017 and is characterized by the sharp V-shape design of its nose with large up-slanting LED headlights that create the distinctive blue internal hue. The five-door hatchback design was meant to appeal to mainstream drivers looking for a familiar yet distinctive exterior design. The Leaf is front wheel drive and uses an 80kW (110 hp) synchronous electric motor. The battery is located in the heaviest part of the EV, below the seats and rear foot space which keeps the center of gravity very low and increases the structural rigidity. The battery pack is expected to retain 70-80% of its capacity after 10 years of operation. The estimated top speed of the Leaf is 93 mph and can get up and go from 0 to 60 mph in 10 seconds. A unique feature of the Leaf is that it has an additional lead-acid battery that provides power to the car’s computer system and accessories. This battery also has its own dedicated recharge system that utilizes a small solar panel in the rear spoiler. 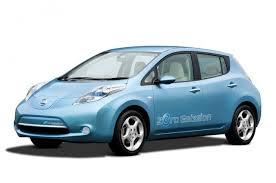 For the 2014/2015 model year, Nissan saw an increase in the EPA measured range from 75 to 84 miles. This was primarily due to the way that the EPA measured the range by eliminating the blended range rating and only used the 100% charge range figure. In 2016 Nissan added more battery capacity which again increased the range of the Leaf on a full charge to 107 miles using the new 30kWh battery. The average operating cost of the Leaf is 3.5 cents/mile and further analysis found that the Leaf’s operating cost is about half the cost per mile of an equivalent gasoline-powered vehicle for trips up to 70 miles which is close to the maximum range of the Leaf. Additionally, the U.S. Government offers a Federal Tax Credit of approximately $7,500 to new owners who purchase the Leaf. The price for a fully loaded Leaf is approximately $34,840 but prices will vary depending on the trim level selected.

The second-generation Leaf (2017 to present) was introduced in 2017 in Japan and included a 40kWh battery pack with an EPA estimated range of 139 miles on a single charge. The 2019 model is expected to have a 60kWh battery pack that will provide a range of approximately 225 miles. The Leaf is the best example of a Zero Emissions Vehicle and promises to revolutionize the way the general population drives by changing the way people view electric vehicles. One does not have to spend $100,000 dollars for a Tesla to get a car that is packed with innovative technology. “Nissan LEAF is a real-world car that has zero tailpipe emissions. With this innovative, affordable electric car, Nissan is bringing a sustainable mobility system breakthrough to our industry and to people all over the world.” said Carlos Ghosn, President and CEO, Nissan Motor Co. Ltd.

Fun fact:
The Leaf is not the first EV to wear the Nissan badge as the Leaf can trace its roots back to the Tama that was built in 1947 by the company that acquired Nissan. The biggest factor that contributed to the birth of the Leaf is Nissan's pioneering work in the development of the Lithium batteries. Without that groundbreaking work the modern EV would have never come to life.

It is pretty obvious why the Leaf has been extremely successful. How does it stack up against the competition? Let's take a closer look.

As you can see from the table, the Leaf is not the leader in every category but it leads the pack where it counts. If you measure your vehicles based on overall quality, attention to detail, workmanship, safety and dependability, then you cannot do better than the Nissan Leaf.